Chris Brown has taken to Instagram to show love to his ex-girlfriend Rihanna, What's on Chris mind - 1906 BLOG

Chris Brown has taken to Instagram to show love to his ex-girlfriend Rihanna, What's on Chris mind

Chris Brown has taken to Instagram to show love to his ex-girlfriend Rihanna, What's on Chris mind

Riri shared a sexy photo of herself modelling her lingerie set and Chris took to the comment to write:

He also added a love emoji.

He later shared another comment encouraging her to release another music soon.

It seems like everytime Rihanna posts a very revealing images something pops up to make it a headline.

Once again, Breezy jumped into RiRi’s comment section under her IG post of a photo featuring herself dressed in lingerie to promote her new Savage x Fenty collection. Brown wrote in all caps, “BOUGHT TO BREAK DA INTERNET! KEEPING RISING QUEEN.” In a separate comment, he typed, “MUSIC SOON PLEASE.”

Kim Kardashian proves to be a brainy beauty as she reads a book while modeling a sexy outfit...

Because of Brown’s history with Rihanna, there were some mixed reactions to his comment. The 29-year-old singer was arrested after assaulting Rihanna, his then-girlfriend, hours before a Grammy Awards event in February 2009. In light of that, some people felt that Brown should have kept his comments to himself, while others agreed with his sentiments.

“She don’t want u bruh,” wrote one person. Another user commented, “I want a @chrisbrownofficial @badgalriri to collab again!! I’m over that old beef. I want that good music!!!” 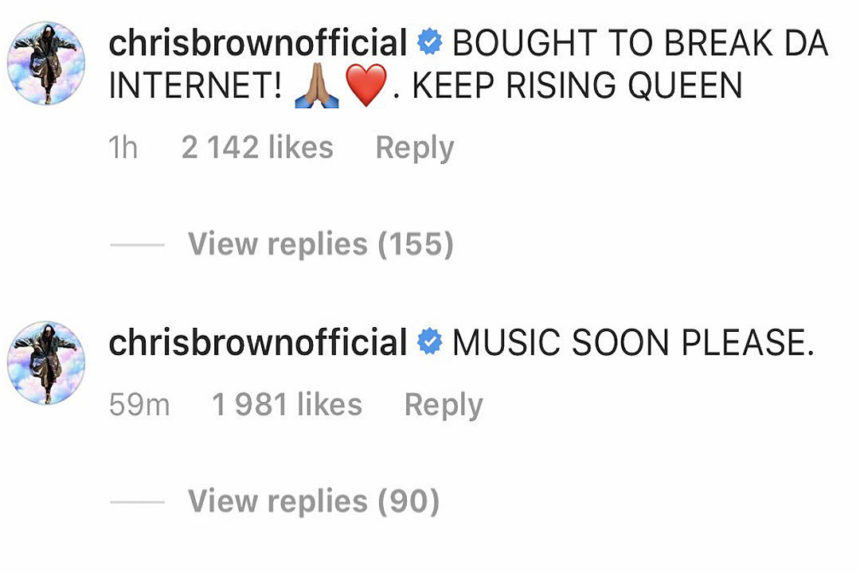 Is Pusha-T Warning Drake Over A Planned Diss Or Is It Something More Serious?
Fans Followers